Trained by Fred Danley for owners Bob and Sissie McClure and aided by a reported 10-mph tail wind, Classy Moon on October 9 won the second of three 400-yard trials by one length in :19.570. Noe Garcia Jr. rode the homebred First Moonflash gelding.

Classy Moon was coming off of a seventh-place finish in a 400-yard New Mexico State Fair Derby (R) trial at Albuquerque Downs on September 10. The gelding is out of Shez Classy Now, a multiple graded stakes winning daughter of champion Now I Know, and he is a half brother to Heza Classy Now, the winner of the 870-yard, $50,000 Bill Reed Memorial Stakes at Ruidoso Downs on September 3.

Classy Moon has won four of 15 races — including two of four at Zia Park — and he has earned $99,824, of which $70,589 has been been banked from nine outs this season. The gelding’s record includes second-place finishes in last year’s Southwest Juvenile Championship Stakes (G2) at Zia Park, and the August 6, $174,000 Zia Derby (RG2) at Ruidoso Downs.

Wine Dont Lie was bred by Mac and Janis Murray’s MJ Farms at Veguita, New Mexico, and he was purchased as a yearling for $24,000 at the 2020 New Mexico-Bred Sale at Ruidoso Downs. The filly has won three of 11 races and has earned $57,252.

JC New Dawn, the third-fastest qualifier, won the first trial by a half of a length. Prepped by Edgar Moreno for owners Telma Meraz and Federico Gonzalez and aided by a reported 10-mph tail wind, the gelded son of the Dash Ta Fame stallion Woodbridge tripped the timer in :19.641. Daniel Torres rode JC New Dawn.

JC New Dawn was bred by Cynthia Guadalupe Gonzalez, and he was coming off of a second-place finish, a neck behind winner River Flash, in the 400-yard, $288,000 New Mexico State Fair Derby (R) at Albuquerque Downs on September 25. The gelding has won four of 12 races and has banked $165,907, and his record includes a third-place finish in the Januarry 29, 400-yard Shue Fly Stakes (RG2) at Sunland Park. 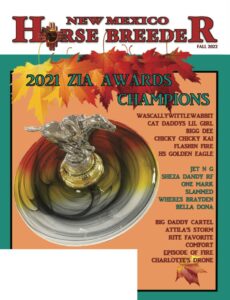