The top three finishers from the three trials made the final, along with one of the fourth-place finishers, Crossfire Cowgirl, who won a shake held at the Ruidoso Downs race office on Saturday.

Nostrangrtotherain was bred by Greg Green and Dwain Yarbar. The gelding is one of three winners from as many starters foaled by Campfire Party, a winning 12-year-old daughter of the Forestry stallion Forest Danger and a half sister to Prendimi, a four-time stakes winner in Maryland and New Jersey from 2019-21.

Nostrangrtotherain has earned $64,530 from three outs, and his two wins include the May 8, 4 1/2-furlong C.O. “Ken” Kendrick Memorial Stakes (R) at SunRay Park.

Leave Them Behind and Z Marks The Spot won the first and third trials, respectively. Trained by Fred Danley for owner J & SM Inc. of Fort Stockton, Texas, Leave Them Behind scored a 1 3/4-length victory in :58.72. Enrique Gomez rode the homebred dark bay or brown Attila’s Storm gelding.

Leave Them Behind was making his career debut. The gelding is the first starter produced by Ivy Gimlet, a winning and multiple stakes placed 8-year-old daughter of the Artax stallion Diabolical. His second dam, the Bernstein mare Toll Taker, won three stakes from 2004-06, including the ’04 Astarita Stakes (G3) for 2-year-old fillies at Belmont Park.

Z Marks The Spot is one of three winners from four starters foaled by Zesty Salsa, a winning daughter of the Storm Cat stallion Dome who ran third in the 2013 Rio Grande Senorita Futurity (R) for New Mexico-bred 2-year-old fillies at Ruidoso Downs. His second dam, the winning Victory Gallop mare Victory Girl, produced Excessive Victory, a half sister to Zesty Salsa who won the 2009 La Senora Handicap (R) at Sunland Park.

Trainer Todd Fincher qualified seven of the 10 finalists. The complete list of qualifiers is below, listed in alphabetical order: 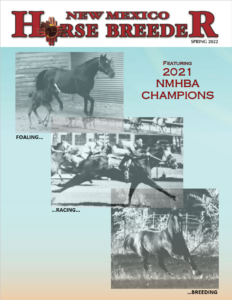