Chicky Chicky Kai, a daughter of the Chicks A Blazin stallion Jess A Chicks racing for Mike G. Parker, is the fastest qualifier to the October 31, $200,000-est. New Mexico Cup Derby (RG2).

Chicky Chicky Kai was bred by Dirk Jones, and she is a half sister to graded stakes winner Wahene Version. The filly has earned $100,141, of which $92,155 has been banked from seven races this season, and her season record includes a second-place finish in the September 19, 400-yard New Mexico State Fair Derby (R) at The Downs at Albuquerque.

Second-fastest qualifier Hollyn Bootie won the second heat by a head from third-fastest qualifier Bigg Dee. Prepped by Trey Wood for owners Mark and Annette McCloy, the homebred Big Daddy Cartel filly covered 400 yards in :19.582 while posting her fourth win in 11 races and pushing her bankroll to $232,744.

Hollyn Bootie was coming off of a fourth-place finish in the open 440-yard, $439,991 All American Oaks for sophomore fillies at Ruidoso Downs. The filly’s stakes resume includes a victory in last year’s Zia Futurity (RG1) for New Mexico-bred 2-year-olds.

Bigg Dee was ridden by Mario Delgado for owner Rex Wells and trainer James Gonzales II. A $30,000 yearling purchase at the 2019 New Mexico-Bred Sale, the gelded son of Big Daddy Cartel has won eight of 14 races — including three stakes — and he has earned $326,560. 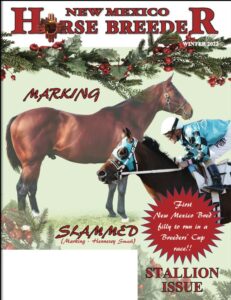